Wireless security cameras are the hottest trend right now. But should you buy a camera which is less than $25 for your home security? Well, in this review we’ll focus on Wyze Cam V2. We will reveal every detail about it. So, if you are looking to buy a Wyze V2 security camera, then this review might help.

The change of the decade saw a rise in the purchase of security cameras. People are now more concern about their home security. So, through their camera, they can look at their homes anytime anywhere.

Cameras with wire are the thing of the past. Now, wireless cams are dominating the industry. Wireless cams come in all shapes and sizes and they are best for any place. You just have to position the camera in the right place and you are good to go.

But, wireless cameras don’t come cheap. As compared with normal security cams they are expensive. So, what to do then? Well, there are certain cams which are inexpensive and perform way better than expensive camera tech. Wyze cam V2 is one of them.

It is a small piece of technology and has tons of features inside it. When we first bought it, we were shocked by its size. Its height is just 2.20 inches. To tell you the truth we were first scared that how this small thing would perform. But it didn’t baffle us and we were completely satisfied with its performance.

The camera is Wi-Fi enabled and is compatible with Google Assistance and Amazon’s Alexa. These smart features are very helpful when you are not at home. Also, it is enabled with AI technology. It specifically focusses on the people rather than anything else in the room.

Before getting to our review, you must know what features a good quality wireless security camera should possess. There is no point in buying a piece of technology which isn’t worth your money. So, here’s what you should consider.

A good security cam should be able to record video in at least 720p. It should have a wider frame so it can cover broad space for video recording. So, its display should be clear.

Its night vision camera should also show good video results. So, you can see every detail even in low light.

This is a must-have feature. Wireless security cameras start recording when motion is detected. A security camera with no motion detection is not worth your money.

Most cameras don’t have this option but we think it is a great inclusion. The audio recording comes handy for various security reasons. Two-way audio recording is also possible in some security cams. You can communicate with another person through a two-way recording.

Smart features like connecting to Google Assistance or Amazon Alexa should be enabled in a security cam. These features allow ease-of-access and make life easier. Also, the camera should have an app for managing all its settings.

Now, let’s come back to Wyze cam V2 review. First, we will discuss some salient features of Wyze cam V2, then its specifications and finally go in detail about its features and specifications. So, let’s get started. 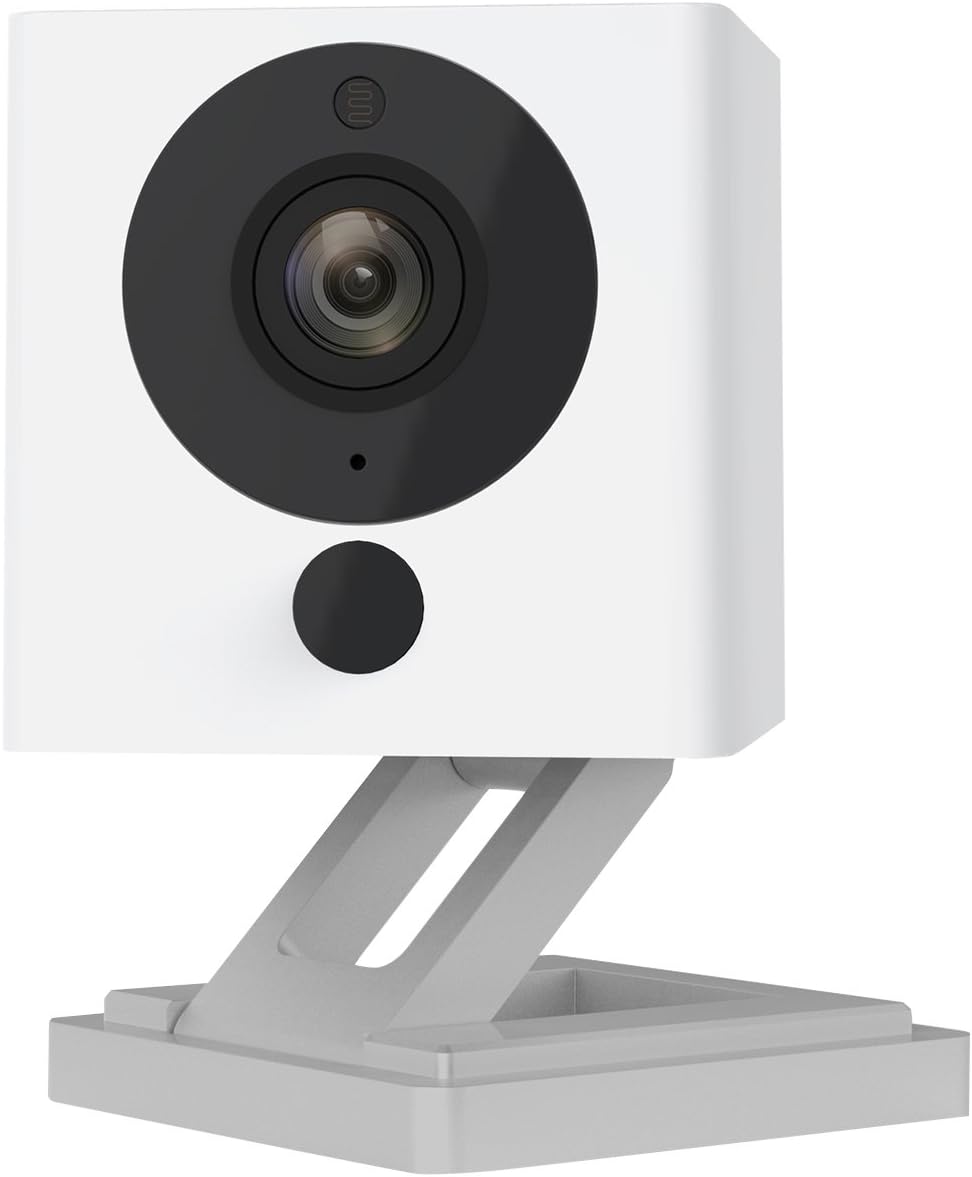 Most wireless cameras have a circular shape but Wyze cam V2 has a square shape. It is just 2 inches in size and has a white color. In the center is the black circle which is its camera. Below the camera is the motion detection sensor.

Wyze has included a base under the camera which can be extended upward. This gives the camera extra height. For wall mounting, it has a magnetic plate that can be mounted on the wall.

On the backside is its charging port and two LEDs detecting the camera is working. It is very easy to move and fits perfectly on every surface.

We like its design and the fact that it is just two inches in height was a big bonus for us.

You can see its design below.

There is no pint in buying a security camera with blurry video recording because it is the primary duty of any cam to produce a good quality video.

Wyze cam shoots video at a resolution of 1920 x 1080 which is fantastic considering its size. The camera has a lens of F2 aperture and a focal length of 2.8 mm. The CMOS (Complementary metal-oxide-semiconductor) image sensor has a 1/2.9-inch length. What CMOS does is creates better images for better viewing?

Although the camera does not have a view of 180-degree for one single shot, still, it manages to give a 110-degree view. So, placing it in your living room or kitchen will give you a good viewing angle. One of the best features of Wyze cam V2 is that it can rotate 360-degrees.

The 360-degree view enables automatically when the camera detects the motion. The motion sensors can detect a person from just 10 feet away. So, if something moves it detects immediately.

The Wyze cam allows you to zoom 8x giving you ultimate details. The technology used for recording videos is H.264 which produces video at 15 frames per second. It is almost the same as the display frames of some of the good laptops. The colors on the video don’t get too sharp or too bright but stay in the normal range.

It also offers a night vision recording. It has 4 IR LEDs of 850 nm which can illuminate up to 29.6 ft. It does not have a color night vision instead it uses an infrared sensor to record video at night. These sensors produce video at 10 frames per second. Recording at night with these many frames is very lucrative. The night vision doesn’t detect the movement quickly as in the day but justifies its price.

We loved the camera result and the night vision camera impressed us very much.   You can see the details of its image quality below.

One of the best advantages of having Wyze cam is that it is compatible with smart home technology.

The bottom of the Wyze cam has a hollow pint where one can insert the Wyze Sense Bridge module. This allows you to set the camera with the Wyze’s motion sensor, window, doors, and smart light bulbs. If the camera notices some movement, it turns the light bulb on.

Also, it is compatible with Google Assistance and Amazon Alexa. With Amazon, it can show live streams when connected with Amazon’s fire T.V stick. You can also perform similar functions on Google Home devices. But with Wyze sense technology, you can perform all the smart operations at once.

The Wyze sense technology is available for just $20 which includes 2 doors, 1 window, and a motion sensor. The Wyze’s smart bulb is not yet available.

We tried it with Wyze’s motion kit and it worked perfectly. All these sensors are about 1 inch and can be set easily on the doors and the windows. So, a big thumb up for its compatibility.

Another major recognition feature of Wyze cam is that it can differentiate between humans, animals or other moving objects. Its motion detectors recognize a person from 10 feet away. Its artificial intelligence focuses on the person specifically rather than other moving things.

The addition of AI adds an extra bit of security and we liked its smart recognition system.

As we mentioned a good quality camera should have an immaculate sound. The Wyze cam V2 not only has one-way audio but two-way audio as well. Two-audio is a helpful and scary feature.

For example, some crook broke in your house and the Wyze cam notifies you. With two-way audio, you can tell the crook to leave your house even though you are not in the house. Thinking that your house is hunted, he will leave immediately. That’s how two-way audio is a scary feature.

Also, you can tell children to move or not touch important things even you are out of the county.

Jokes aside the camera has a built-in speaker and a microphone for two-way audio. The audio it produces is powered by the Class-K amplifiers and delivers sound without any disturbance.

We used the two-way audio and it didn’t disappoint us.

Because of its size (2.2″), some people may think it will be hard to set up. But that’s not true.  The package of the Wyze cam has a setup manual which makes life easier.

You just have to take the camera from the package and plug it in an outlet using the power adopter and a USB cable.

Once you are done, you have to install the Wyze app, scan the QR code and then connect it with your Wi-Fi.

The bottom of the camera has a magnetic surface for wall mounting and adhesive tape for other surfaces.

Setting up the Wyze cam was super easy and it took us just 10 minutes to finish the whole process.

The camera doesn’t come with its SD card but the perks of local and cloud storage are many. If the cloud storage fails, the camera will store locally and vice versa.

With local and cloud storage, it is worth every penny.

The Wyze’s app is a must-have because without it you won’t be able to set your camera. The app performs various features. You can check Livestream, record videos, save footages, see previous videos.

You can do two-way audio from the app and communicate with the other person. Also, the app gives push notifications.

We noticed that the live streaming on the app is a bit shaky and sometimes it doesn’t give full HD view. But overall we were satisfied with its functionality.

With that our review has come to an end. To summarize our review, here are the pros and cons of the Wyze cam V2.

As our review has come to an end we think that Wyze V2 is better to deal with than most of its competitors. It is super inexpensive and produces a great quality video. The features like the two-way audio and smart motion detection increase its credibility.

is a dynamic writer, known for reviewing the products and services throughly and honestly. The writer serves various online communities with his sheer tech knowledge.